Last night's episode of The Late Late Show. Includes "cold opener" with Craig & William "Bill" Shatner sitting before the fireplace, smoking cigars and pondering the great mysteries of life. I was in the studio audience for this one. Yes, that was a real cigar that Captain Kirk was smoking. Really, who on the CBS staff is gonna tell this entertainment industry icon that he can't smoke?


Had a GREAT afternoon. Craig was in top form, we did yesterday and today's shows back-to-back. William Shatner was hilarious. The Lone Bellow have a new record produced by Charlie Peacock and they were (or rather, will be) the musical guest. Michael Sheen, the Welsh actor, was another guest on and was brilliant as well.
Posted by Unknown at 3:43 PM No comments:

This is a pretty cool demolition video. I lived in this building for a few months in late 2005. It's nice to see it torn down. It's even better to know that I was nowhere near the building when this happened.

Posted by Unknown at 3:35 PM No comments:

Posted by Unknown at 9:46 AM No comments: spam slider, a photo by saipanrick on Flickr.
Posted by Unknown at 5:58 PM No comments:

Given to me by a dear friend the other day... 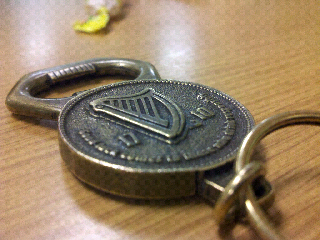 When I arrived in Seattle in November 2010, I noticed there seemed to be a dearth of Filipino restaurants in the area. All the conversations on Yelp, Chowhound and the like seemed to indicate that Filipinos in metro Seattle either cooked at home or went to catered parties, but there were no eateries as such (except for Oriental Mart + Kitchenette in Pike Place Market, which seems to be closed due to construction). But when I found out that Filipino supermarket chain Seafood City had not only opened a branch in south suburban Tukwila, but also brought along the Manila-based chain restaurants Jollibee, Chowking, Tokyo Tokyo and Red Ribbon Bakery.... well, I for one would have to check it out. 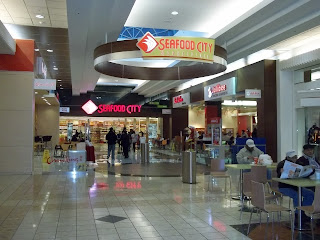 After looking at all the available choices, I opted for Chowking. They specialize in Filipino-style Chinese food, with some local specialties as well. Chowking was my usual choice when I was in Manila. 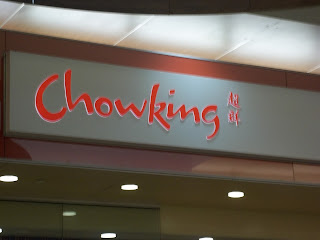 I liked their menu at this location; of particular interest to me is the fact that they serve breakfast all day, and all breakfast orders come with egg, garlic rice and boneless bangus (a native milkfish). After much deliberation, I chose the pork adobo with garlic rice and pancit, and a side of calamansi (native lime) juice. 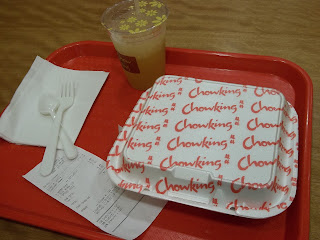 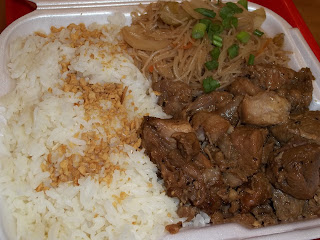 I actually found the food at this branch of Chowking to be pretty good. They were actually my favorite chain fast food place back in the Phils. The adobo had just the right flavor and texture, with hints of vinegar, soy sauce, and pepper. The pancit was perfect too. The garlic rice was the only thing that was unusual, it was just regular rice with toasted garlic on top, and was sort of dry, but when i mixed the pork with it it took on a new life and got that good slightly oily texture that good garlic rice should have. I almost ordered desert but I was too full. For 50 cents more you can have mango or calamansi juice with your meal instead of soda. I was very satisfied with my choice here.
See more reviews of Chowking at http://www.yelp.com/biz/chowking-tukwila.
See more of my reviews at http://rickv.yelp.com/
Posted by Unknown at 2:02 PM No comments:


View Larger Map
Posted by Unknown at 1:00 PM No comments:

I have not written a concert review, let alone a real blog post in quite a while. Nevertheless, I will attempt to tell the tale of my trip to Chicago back in October to see Igor & Red Elvises perform in Berwyn at Fitzgerald's.

First off, I originally planned the trip around a test I was supposed to take to see if I qualified for a government job. I managed to schedule it at 1:00 pm the day of the show. So I got in to Chicago the evening of the 9th, right before midnight, and went to my friend Lia's place to crash. Lia lives in Hyde Park, south of downtown and the area around the University of Chicago. The area also houses notable residents such as Jesse Jackson, Louis Farrakhan, and President Barack Obama. On the 9th it had been announced that Obama had been awarded the Nobel Prize, and on the morning of the 10th Lia and I found ourselves having breakfast at the prez's fave place for breakfast, Cafe Valois. 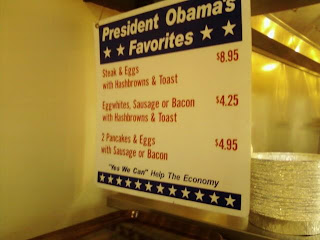 I wound up getting the egg whites, bacon, hash browns and wheat toast, with a side of coffee.
Below is a pic of my plate. 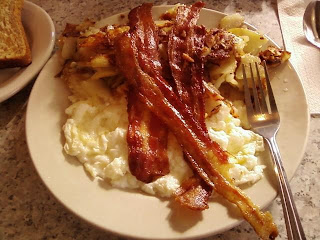 Here's Lia with some bacon: 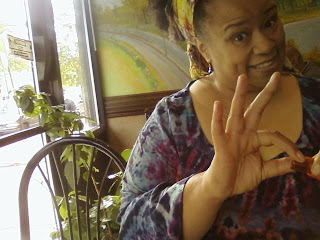 Breakfast was amazing, filling and very cheap. And this place is probably regularly visited by Secret Service, Chicago police and reporters, especially when the Obama family is in town.... as their house is only a couple blocks away.

Lia had some appointments on the north side in the afternoon, so I had her drop me at a Starbucks where I went over my notes for the test. That was only a short walk from the testing center. I actually found the testing center decently run, but they kept having server issues and having to reboot, so I finished the test early and walked down the street to see a friend, Charlie Williams. We went down to Clark & Belmont to check out some thrift stores and I saw some good prices on leather jackets. But why are men's shoes selections in those stores always disappointing?

Next, I met up with Lia and we headed out to Berwyn - a little early, as we gout out there around 4 PM and the concert didn't start until 9. But we wanted to chill out at Wishbone, a southern-style restaurant with very good food which is adjacent to Fitzgerald's. After dinner, I went next door to Sidebar and used their free wifi and had a pint or two of Guinness. Then Lia used the computer while I watched an LA Dodgers game on TV above the bar.

As soon as they opened the doors and started letting people in, Lia and I made a beeline for a table, as those seem to be harder to get these days. I don't understand it, but people in Chicago really seem to like to sit down during a concert - listening to a dance band in a small club. Hmmm. I was wondering if there would even be anyone at the show, but the place was packed. And I thought the country was having economic troubles. I guess that just means more people are willing to go out and enjoy some good tunes, drinks and fun with friends and temporarily forget their financial woes. Not to mention there was a different line-up and name to the band than last October - "Igor & Red Elvises" this time instead of "The Red Elvises". And two different members - Puerto Rican/Floridian Milka Ramos on vocals and guitar, standing where Elena was last year, and Israeli bassist Kfir Melamed filling Oleg's (clown) shoes. The basics had not changed - Igor seemed like he was having a fun time this year, and Adam Gust kept me wondering how his drum kits stays in one piece, withstanding the assault he subjects it to every evening.

During the intermission, I got to hang out with Sonjia Mata, the band's semi-official roadie and merch wench (as well as Adam's girlfriend). I had saved Sonjia from internet pirates earlier in the year, when someone in China hacked her Facebook account and started sending everyone on her contact list fake messages. I also got a chance to meet Milka finally after exchanging a few messages online. Let me say, she's a lot taller in person - when she's wearing those tall red boots, that is. :-) 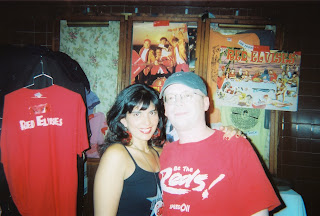 {me and Sonjia at the merchandise table}

I forgot to keep a record of the band's set list, but some of the more notable songs they played, as well as RE concert staples, were: "I Wanna See You Bellydance", "Rocketman", "Drinking With Jesus", "Strip Joint Is Closed", "Lara's Wedding", "Natasha's Singing Reggae", "Lovepipe", "Boogie On The Beach", "Sad Cowboy Song" (Sonjia joined me on the Sad Cowboy Conga Line for this one) and "Telephone Call From Istanbul" (a Tom waits cover) as well as a brand new song, "Let's Get Drunk And Funk".

{"Let's Get Drunk And Funk" NYC 10/14/2009}
Milka has a great stage presence and really adds a lot to the show. She is quite popular too. I had to actually queue to get a pic with her, and there were people approaching her constanly to tell her how much they enjoyed the performance. Kfir is a really excellent bassist, he has a real jazz and fusion style and world beat sensibility which blends in well with the songs. That's some of the deepest bass I have heard in, like, forever. I really had a great time and danced like crazy. I was only a little disappointed that Elena was not able to come over from Russia due to visa issues, I hope she will be on the spring tour. the crowd (and Sonjia too) More pictures on Flickr.com
Posted by Unknown at 2:42 PM No comments:

Audition reel for "The Best Job In The World"

About eight or nine months ago, I shot, directed and edited a one minute video for my friend Aaron, who was applying for the position of "caretaker" of a small island off the Great Barrier Reef. Here's the final edited video that he submitted:

Posted by Unknown at 4:54 PM No comments:

A Walk Across America on Google Maps

other sites I maintain